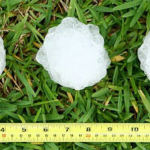 Storms that moved through the Treasure Valley on Thursday afternoon and early evening pummeled a narrow swath of the region with huge chunks of hail. Thousands throughout the Valley were left in the dark.

The National Weather Service in Boise said it received reports of golf ball-sized hail mainly along the Ada County Line, in northeast Eagle and along Idaho 55 toward Horseshoe Bend.

Of the hail’s effects in Eagle, resident Julie Lokken had this to say: “What a mess! Leaves plastered everywhere. Worst I have ever seen!”

A mudslide shut down Idaho 55 between Banks and Smiths Ferry.

The highest recorded windspeed in Boise on Thursday was 41 mph, with a gust of 51 mph also recorded. Only 0.07 inches of rain was recorded at the official Boise measuring station although higher amounts fell elsewhere in the valley.

The storms are out of the picture for a while, according to the National Weather Service, as cooler, drier conditions begin to take hold. Temperatures are expected to hover around 80 degrees Friday and through the weekend, with slight winds from the west.

Insurance Companies Struggle To Keep Up With Demand In Blair